Gianni Infantino has been left flying the flag for UEFA in the Next FIFA President betting after UEFA president Michel Platini was wiped ou...

Mouscron-Peruwelz v Sporting Charleroi Tuesday December 22, 19:30 It proved to be a delightful night. I went to see the new Star Wars fil...

Arsenal  are the new favourites to win the Premier League title after they defeated Manchester City 2-1 at the Emirates Stadium on Monday n...

Arsenal v Man City Monday 21 December, 20:00 Live on Sky Sports 1 Arsenal With just one defeat in their last ten games in the Prem...

There is not a lot of Christmas cheer surrounding Old Trafford at the moment, but a trip to the Britannia Stadium may not be quite the type of break to buoy Manchester United, who sit uncomfortably outside the Premier League top four on goal difference.


Stoke away is just one of those festive fixtures no manager wants, and Red Devils boss Louis van Gaal is certainly under the microscope at the moment, with a win on the road priced at 13/10 by Coral. Though, that looks a little long considering United have a goal difference of just eight and are without victory in six outings across all competitions.
The stats look damning but, according to reports, Van Gaal gave a Christmas speech intended to rally his Red Devils troops, and fans will be hoping this battle cry can make a difference at the Britannia.
Customers may still fancy Stoke at 11/5 for a home win, and to potentially deliver the final blow for Dutchman Van Gaal’s stay in the Man Utd dugout. However, the Potters are without a win in two themselves and split the spoils last time United came to town, so a draw at the same price of 11/5 looks more likely to come off.

Bojan’s boys to cause havoc

Stoke have had struggles in front of goal themselves, and will be keen to get on the scoresheet against their Red Devils rivals at an ideal moment.
The trio of former Barcelona schemer Bojan Krkic and ex-Inter Milan pair Marko Arnautovic and Xherdan Shaqiri are most lauded for modernising the Potters’ attacking play, and may smell blood against a Man Utd backline which has recently come undone against promoted Premier League sides Bournemouth and Norwich City.
Mercurial Austrian talent Arnautovic memorably bagged a brace to sink Manchester City recently, and is tasty at 2/1 to inflict damage on the Red Devils at any time. While, Bojan’s brilliance sees him priced at a fabulous 3/1 in a Coral match special (max stake £20) to also ripple the net anytime for the second match in a row.

Main United forward threat Anthony Martial is also up for grabs in a match special, with the fantastic Frenchman 4/1 to score and Man United to win, also with a maximum stake of £20.
Should customers fancy the France international to bag, but the Red Devils not to take all three points, menacing Martial, who was recently crowned Europe’s Golden Boy by journalists, is similarly great value at 11/2 to nab the opener.
Alternatively, skipper Wayne Rooney is 6/4 to strike anytime, with Dutch winger Memphis Depay the same price, though Martial, who hit a consolation against the Canaries, looks most enticing. 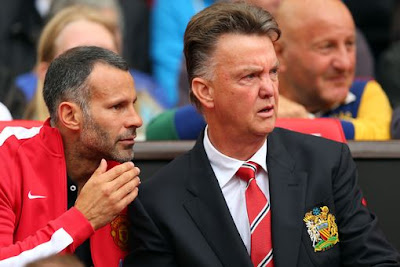 Gianni Infantino has been left flying the flag for UEFA in the Next FIFA President betting after UEFA president Michel Platini was wiped out of contention once and for all by an eight-year ban from all football-related activities, a punishment shared by outgoing FIFA chief Sepp Blatter.
The two most powerful men in football were investigated by the governing body's ethics committee over a £1.3 million payment made by Blatter to Platini in 2011, which they explain as being delayed remuneration for work conducted by the latter as the former's technical adviser between 1998 and 2002.
The committee concluded that it was a "disloyal payment" which had no legal basis in the original agreement that the pair struck at the start of their since-severely-fractured working relationship. Though it was not proven to be a bribe, it was determined that a "conflict of interest" had occurred.
Both men have protested their innocence and aired their intention to appeal. Blatter vowed to "fight for me and for FIFA". Platini was even fiercer, describing the procedure as "a pure masquerade". He said: "It has been rigged to tarnish my name by bodies I know well and who for me are bereft of all credibility or legitimacy."
However, neither will be cleared in time to significantly influence the upcoming election on February 26, the result of which is that Prince Ali Al-Hussein - who Platini backed in the previous ballot only to antagonise the Jordanian with his plan to stand himself - is now evens favourite on the Betfair Sportsbook.
Asian Football Confederation president Sheikh Salman is perceived to be his main competitor at 2/1, but Infantino is an intriguing candidate at 5/1.
The Swiss UEFA general secretary is best known as the guy who oversees the Champions League draws, yet he has been very loyal to Platini throughout this process, vowing to step aside if the Frenchman was absolved.
As a consequence, he should now receive the backing of his boss and will potentially also inherit the support of the former Ballon d'Or winner's allies, for instance the English Football Association.
If you anticipate an even bigger upset, South Africa's Tokyo Sexwale is a 12/1 shot and the other European hopeful Jerome Champagne is available at odds of 16/1. 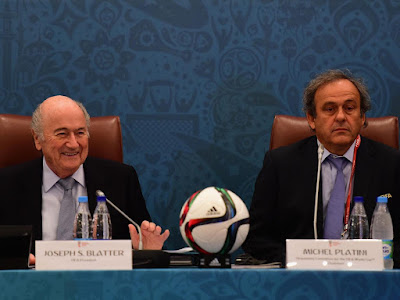 Mouscron-Peruwelz v Sporting Charleroi
Tuesday December 22, 19:30
It proved to be a delightful night. I went to see the new Star Wars film (ridiculously amazing, by the way), and when I emerged, I discovered that our boys Casertana had bashed Messina 4-1. The Force is strong with us at the moment, so let's hope that continues.
We're making the short hop across to Belgium, and taking in a top-flight game between Mouscron-Peruwelz and Sporting Charleroi. Belgium sometimes gets a bad rep for being a bit dull, but these two sides appear to be trying to change that.
Mouscron-Peruwelz are a lowly 14th in the 16-team standings, but outside the top five only Mechelen have a better scoring record. Mouscron-Peruwelz have banged in 28 goals in 19 games, but their problem is at the back, as they have leaked 30 goals.
All of this means Mouscron-Peruwelz are a rather entertaining watch. 12 of their 19 Belgian Pro League games have featured at least three goals, including six of their last seven home games.
10th-placed Sporting Charleroi are only three points better off than tonight's opponents, and after a cautious start to the campaign, Felice Mazzu's men have started opening up in games. Seven of the Zebras' last ten league games have featured three goals or more, including each of the last five.
When these two sides last met back in July, Charleroi won 2-1, and I'm expecting goals again tonight.
Recommended Bet
Back Over 2.5 Goals at 2.02 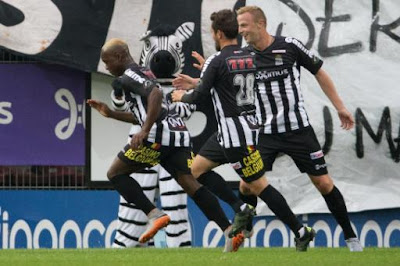 Arsenal are the new favourites to win the Premier League title after they defeated Manchester City 2-1 at the Emirates Stadium on Monday night.

The Gunners - who have been matched at a high of 9.00 in the Premier League Winnermarket - can now be matched at just 2.14 after goals from Theo Walcott and Olivier Giroudsealed the win over their nearest market rivals.

Yaya Toure scored a late consolation goal for The Citizens.

The victory moved Arsene Wenger's men to within two points of surprise leaders Leicester City, but perhaps more significantly, opened up a four-point gap to Man City in third.

Manuel Pellegrini's men - who after winning their first five league games this term were matched at just 1.38 to win the title - can now be backed at 3.20 to regain the crown they won in 2013/14.

Giroud's goal took his tally to the season to 10 in the Premier League, five behind Jamie Vardy, and the Frenchman is now available to back at 11.00 to be the season's Top Goalscorer.

Next up in the league for Arsenal is a trip to out-of-form Southampton on Boxing Day, before home games against Bournemouth and Newcastle see Wenger's men into the New Year.

Man City meanwhile face a trip to Leicester on Saturday, a game they can't afford to lose to their now title rivals.

You can read match previews of every single game in England's top flight over the festive season by visiting our dedicated Premier League section here on betting.betfair. 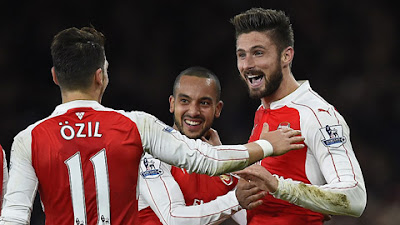 Arsenal v Man City
Monday 21 December, 20:00
Live on Sky Sports 1
Arsenal
With just one defeat in their last ten games in the Premier League, Arsenal are in good shape ahead of the traditionally busy Christmas period. They currently sit in second, five points behind this season's pace-setters Leicester City, and know that avoiding defeat here against Man City will see them in fine fettle going into the Boxing Day fixtures.
Although beset with injuries (as usual), the Gunners have managed to handle things very well - players like Joel Campbell and Mathieu Flamini have stepped into the breach and performed admirably as understudies - and the visit of Manchester City is a test they'll surely relish with a view to trying to lift their first title since 2004.
Alexis Sanchez may well be back and give Arsene Wenger a selection headache, but he is likely to start on the bench.
Man City
Sitting one point behind Arsenal, largely due to two poor results against Stoke and Liverpool in their last four games, Manuel Pellegrini's Man City also know they're in spitting distance of the league's summit and will use Arsenal's traditional weakness against the top teams as motivation.
Sergio Aguero could come back and replace Wilfried Bony (who has done a decent job deputising), and that will further focus the mind for City; having a world class target and finisher up top will make a world of difference, and the excellent defensive partnership ofLaurent Koscielny and Per Mertesacker will be tested to the limit by both the diminutive Argentinian and the skillful set of attacking midfielders sure to line up behind him.
Fernando and Pablo Zabaleta are both out injured.

Match Odds
Arsenal's excellent form this season means they'll go into the game as favourites, and they currently trade at 2.42 to win on Monday night. Man City are further out in the betting, at 3.15. The Draw is priced at a favourable 3.60, when one takes into account the fact that a draw suits both parties nicely and how evenly-matched the teams are.
I have to say, I do like The Draw here for reasons stated above, and I'm surprised to see it priced so generously.

Over/Under 2.5 Goals
Somewhat predictably, Over 2.5 Goals is firmly odds-on at 1.76 but before you dive in expecting an open, attacking game, Opta tell us that, on average, this fixture only yields 2.56 goals per game and may not quite be the goal-fest you're expecting.
As I've said, a draw suits both parties and both will be wary of losing it. What's more, the teams could simply cancel each other out. Unders at 2.28 looks far more appealing to this writer. 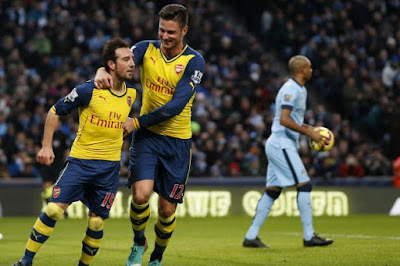