Arsenal v Hull City Saturday February 11, 12:30 Live on Sky Sports 1 Arsenal So here we are again. We have reached another February, and ...

Arsenal v Hull CitySaturday February 11, 12:30Live on Sky Sports 1
ArsenalSo here we are again. We have reached another February, and it appears that Arsenal's title challenge is once again dust and dreams. A tough Champions League last-16 tie against Bayern Munich looms on the horizon (although Bayern aren't playing that well, truth be told), and a fierce battle for a place in next season's competition awaits.Whether you are an Arsene Wenger loyalist or an advocate for change, the bare facts tell a brutal truth. Arsenal were ten points off top spot at the end of last season, 12 points behind at the conclusion of the previous campaign, and they trailed by seven points the season before that. They haven't been within five points of the eventual winners since 2008.Wenger has pleaded with fans to remain united and support the team, perhaps unwisely citing the Spurs faithful as an example for Gunners supporters to ape. Even the most ardent Arsenal fan would've had their patience stretched by a feeble home defeat to Watford, followed by yet another surrender away from home against the leaders and champions-elect Chelsea.At least the Opta stats make good reading ahead of Saturday lunchtime's clash with Hull City. Arsenal have won their last seven Premier League games against the Tigers, they haven't lost to the men from Humberside in 13 meetings, and they have won 15 of their last 17 Premier League home matches against newly-promoted opposition.Speedy right-back Hector Bellerin is a doubt after picking up a head injury against Chelsea, but Mohamed Elneny should be available after AFCON duty with Egypt. Granit Xhaka is still suspended.
Hull CityAlthough it's only early days, new Hull City Marco Silva is having a good old go at exploding the "Premier League experience" myth. Pundits often talk of the necessity for players or managers to know the Premier League before they arrive. A lack of experience didn't seem to do Arsene Wenger much harm when he arrived at Highbury (nor Dennis Bergkamp, Patrick Vieira and Thierry Henry for that matter), and Antonio Conte seems to have got things sussed down at Chelsea.Silva has done a terrific job so far. The Tigers have won every single home game since the former Estoril, Sporting and Olympiakos boss arrived, the most recent of which was a fully deserved 2-0 win over Liverpool. Against Jurgen Klopp's men, Hull were happy to cede possession, and were dangerous on the counter-attack. New signings Kamil Grosicki and Andrea Ranocchia shone - Grosicki showed his pace and intelligence out wide, while on-loan Inter defender Ranocchia was man of the match. If he can continue on this path rather than returning to the error-prone nervous wreck he became in Milan, Hull will have made a very smart acquisition.Now that he has turned around Hull's home form, Silva must now find a way to get results on the road. Although a recent goalless draw at Manchester United was a fine result, the general picture is concerning. Hull have lost nine of their last ten games away from home, and they've failed to score in eight of those matches.That said, Silva does have experience of leading a team to victory against Arsenal at the Emirates. He was in charge of the Olympiakos side that stunned the Gunners with a 3-2 victory in the group stage of the Champions League.Striker Abel Hernandez and experienced defender Michael Dawson are both out, but on-loan Liverpool winger Lazar Markovic is back after missing the game against his parent club.
Match OddsDespite Arsenal's slump and Hull City's revival, the Gunners are still pretty short at 1.31. I can see the logic in this. Hull are still in the bottom three, and despite their battling draw at Manchester United, their overall away record is the second-worst in the division.Arsenal are having a major wobble, but with their title hopes realistically up in smoke, they might start to play with a bit more freedom. Wenger's side have won eight of their 12 home games in the league, and even though they face a good coach with a determined squad, Arsenal's extra quality should eventually shine through here. This could be a backlash after a damaging week.
Over/Under 2.5 GoalsUnders is the outsider here at 2.66, but if you wanted to make a case for that, it's worth considering the following. Hull haven't been scoring away from home all season, and five of their last eight Premier League away matches have featured fewer than three goals.An unders bet on Arsenal is always a bit dangerous, as they have an attack that could catch fire in any given match, but they may start a little tentatively after recent defeats. Four of their last eight home games in the league have seen an unders bet land, and the recent 2-1 win against Burnley was 1-0 until a crazy finale. If it takes the Gunners a while to pick the lock, then you at least might have a good opportunity to cash out.
First GoalscorerAlexis Sanchez seems to just love playing against Hull City. Opta tell us that in his three league games against them, he has five goals and one assist. He is trading at 4.20 to score the first goal.
Recommended Bet
Back Under 2.5 Goals at 2.66 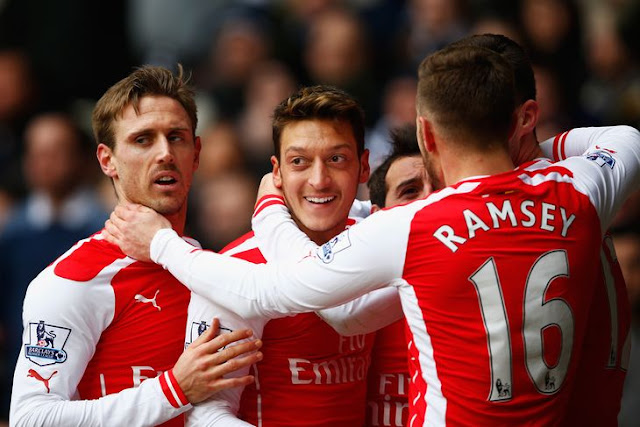 Liverpool v TottenhamSaturday, 17:30Live on BT Sports 1
Liverpool
Four losses in their last five is pretty shocking stuff and the only thing more surprising than that is that the one match the Reds didn't lose was against the best side in the country. Oh yeah, they should have lost that one too; Chelsea missed a penalty late on.
That Liverpool were always going to concede goals this season was blatantly obvious. Ragnar Klavan and Joel Matip are new to the league, Dejan Lovren has good days and bad days and whereas James Milner has done remarkably well in his new position at left-back this season, it's a big ask for him to take on classy wingers running at him as well as being expected to support the attack. It wouldn't be the worst idea to play him somewhere in midfield and allow Javier Moreno (a natural left-back) to have a run in the side. As for the goalkeepers, the current question isn't who's better but rather: who's less likely to make a bad mistake?
The difference over the last month or so has been that the Liverpool goals have dried up. Yes, Sadio Mane was away for a few games but Philippe Coutinho has been available since mid-January after injury. Daniel Sturridge has also managed that most rare of feats for him and stayed fit for a considerable amount of time so all in all, no excuses.
Defeat here and Dietmar Hamann may have a few more people thinking he's talking sense when he said it made no sense to give Jurgen Klopp a six-year contract.
Tottenham
Tottenham's progress over the last few weeks has been very much a reflection of their own manager: unfussy, uncomplicated and determined.
Harry Kane made the headlines last time out after his goal was enough to beat a gutsy Middlesbrough side.
Elsewhere, the restraint shown by Dele Alli in the face of completely unnecessary provocation from Boro keeper Victor Valdes shows how far he's come. He's not just a talented starlet anymore, he's a mature player perfectly aware of what his responsibilities are.
But the most consistent player of all over the past few weeks has been Mousa Dembele. You don't notice him that much because he rarely scores goals or does anything remarkable but he's one of those who you notice when he's not there; things just don't click as they normally do when he's absent.
But Tottenham still have injury problems ahead of this match, with key defenders Jan Vertonghen and Danny Rose both out with injury. It means Mauricio Pochettino is likely to stick to four at the back, having ditched 3-4-2-1 at half-time at the Etihad a few weeks' back.
Match Odds
On current form there's no way Liverpool should be 2.30. You really can't see them keeping a first clean sheet in six matches against this potent Spurs attack so if you're going to take that price your best hope is that it will be a wide open match which Liverpool somehow win 3-2 or something. Not for me.
A look at more long-term trends however suggest this is a fixture the Reds enjoy. Opta tell us they're unbeaten in it over their last eight and that only against Newcastle have they scored more Premier League goals. They add that Pochettino has never beaten them as Spurs manager (though he did as Southampton boss).
Still, the contrast in both teams' form means we simply have to take Liverpool on. But how?
Asian Handicap
The answer might be in the Asian Handicap market. Backing Tottenham 0 & +0.5 at 2.00 means you'd win at even money if they win and at odds of 1.50 if they draw. That looks the best option.
To Score
It's normal that Sadio Mane hasn't yet been at his best after returning from the African Cup of Nations but he's their key man here and reserve left-back Ben Davies knows he's in for a busy afternoon. Mane should be around 3.00, a similar price to Roberto Firmino and Philippe Coutinho though the Southampton man would be the selection if you were looking for a Liverpool scorer.
Alli let me down the last time I tipped him but he always seems to get at least a couple of chances a game so if you can get 4.00 on him, he should give you a good run for your money.
But the most likely scorer in the game is of course Kane. Opta tell us he's scored more goals in the Premier League in 2017 than anyone else bar Romelu Lukaku. They both have six. Kane will be around 2.60 to score here and I've seen far worse bets than that this week.
Penalty taken?
Take your pick from the numerous stats that suggest there may well be a penalty in the match. Opta point out that no side has scored more penalties against anyone in the Premier League than Liverpool's 12 against Tottenham. And no-one this season has scored more penalties than Milner, a perfect six from six. One of those was on August 27 against...Spurs.
Oh and Spurs did of course win their last match 1-0 thanks to a Kane goal scored from...the penalty spot. The 3.80 on offer is just too good to resist.
Ref Watch
Anthony Taylor is quickly becoming one of the league's most consistent referees. He averages just under four yellows a game but don't expect to see a red here. He's only dished out three in 27 matches and two of them were in Man City v Chelsea, where Fernandinho and Sergio Aguero's actions really gave him no choice.
Recommended Bets
1.5 points Back Tottenham 0 & +0.5 on Asian Handicap market @ 2.000.5pts Back 'yes' on penalty taken @ 3.80 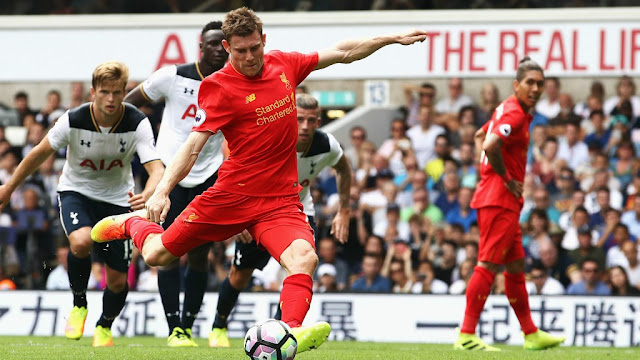